NSW livestock and cropping farmer Sam Kelly is injecting liquid nutrients to unlock the potential of his soils, which hold the key to the successful regeneration of the farm’s grazing land.

Sam Kelly wouldn’t think twice about investing in Liquid Systems (SA) equipment if he had his time again. “I’d do it again in a heartbeat,” said Sam. “I guess every operation has to work out whether it’s economically viable for them, but from my perspective I wouldn’t hesitate.

“The worst mistake I made was not investing in a dual system, so we can experiment with putting more products down the tube.”

Sam, who farms at Yass in the NSW Southern Tablelands, converted to liquid injection last year after his wheat crops struggled during a record wet season the year before.

“It was incredible how wet it was,” said Sam. “It was the wettest winter period on record for our area and what happened was the wheat started to die. Research out of Canada showed that in a wet environment copper gets locked up and becomes less available to the plants.

“So, we applied foliar spray by air, which is very expensive. We only did a couple of smaller paddocks just to try it, but it was too late. By the time you’ve realised you’ve got an issue, your plant growth and yield potential are affected. That’s why we looked at liquids.”

Sam chose Liquid Systems (SA) PR-1 injection system, which is fitted to the farm’s 6m-wide K-Line seeding bar and operated by a Trimble XCN 2050 with Field IQ. Finding injection equipment that dovetailed into a single operating system was high on Sam’s priority list. “At one stage I had a guidance screen, a tractor screen and an air seeder screen. The last thing I wanted was another screen for my liquid system,” said Sam. “Liquid Systems equipment was Trimble-ready, allowing me to plug it straight in and operate off the one screen.”

Liquid Systems equipment was Trimble-ready, allowing me to plug it straight in and operate off the one screen.

To formulate a liquid product mix, Sam and his agronomist, James Cheetham from Delta Agribusiness, conducted soil tests and took tissue samples with the results revealing deficiencies in copper, zinc, boron and silicon. They devised an experimental mix of inputs, including 1L of copper, 3L of SeedBoostTM by Omnia, 200mL of Impact and 80g of Molybgednum sodium (on canola). SeedBoostTM, which includes a range of 11 elements from phosphorous and manganese to sulphur and zinc, is typically used as a seed dressing. “These products are commercially available but what we’re doing with them is not the norm,” said Sam. “Traditionally SeedBoost is used to coat seed, but how much can you fit on a wheat seed? You can’t fit that much. We also chose the fungicide Impact because it’s cheaper to put down the tube. Obviously you’ve got to consider what’s going to mix together. If you don’t do a glass jar test, you’ll end up with gel.”

Using his custom-designed liquid mix last year, Sam found a strong nutrient response in wheat crops. “The most significant outcome was that we completely reversed all of the deficiencies across the board. It didn’t really surprise me. We’d done the research and were trying to create something similar to what industries like viticulture have been doing for years, but on a commercial basis in a broadacre cropping situation. I think we’ve been able to do that,” he said.

Sam crops 485ha of wheat, oats, canola and lucerne, but grazing makes up the lion’s share of his enterprise with stocking rates of up to 20,000 sheep and 1000 cattle on an annual basis. “Our long-term strategy is to improve the soil structure for our pasture improvement program. That’s the ultimate aim,” said Sam. “It’s not as straight forward as saying we’re doing it all for cropping. The cropping and yield benefits are part of a big picture. The cropping gives us the ability to pay for pasture renovation.”

“And the metering gives accuracy, which saves money. You’re saving money all the time, which means you get back the cost of the system tenfold.”

While it’s too early to report on the flow-on effects of liquid injection on pasture improvement, Sam is optimistic about yield results in wheat. Despite the impact of 220mm of rain before Christmas last year, he was able to reap two paddocks, which yielded 7.5t/ha. Six weeks later, his grazing wheat yielded 6.3t/ha, which he forecast to yield between 5 and 6t/ha and usually averages 3.5 to 4t/ha. He also believes his crops were more frost resistant. “A very dry winter meant big frosts last year, resulting in a lot of stem damage,” he said. “We had about 1% frost damage, whereas many local farmers had complete write-offs. My agronomist and I put that down to general crop health.”

Overall, Sam has been impressed with the simplicity and high quality of his equipment from Liquid Systems (SA).

“The stacker distribution system is my favourite part, because the product is always distributed evenly, right across the bar. I don’t see rows further out getting less liquid or those closer in getting more.

“And the metering gives accuracy, which saves money. You’re saving money all the time, which means you get back the cost of the system tenfold.” 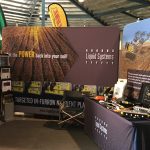