Liquid Systems’ Nicol Morrison interviews Neville Arentz from Nutrien Ag Solution. Neville shares his past and future thoughts around in-furrow application in his region. Neville has lead the industry to adopt new technologies to obtain sustainable production efficiencies in a challenging and very variable area for several decades now.

Joining the Dots about In-furrow application aims to share tips and insights that might not be readily available.

What is your role? And give me a brief overview of your journey to this role.

Neville
I manage the Nutrien Ag branch in Ouyen VIC. I started in Agronomy around 1980, and back then we were purely livestock business and sold a bit of single super, Pivot 15 /19, 24D (Amine & Ester 80 usually by plane and mister) and Trifluralin and that’s all that was around in those days.

As we moved into the mid 80’s, (1983) stripe rust hit us and there was a mad scramble for fungicides. Army worms CN was a major disease in 80s which brought peas into the rotation, grass herbicides and other chemicals became more available. Along with the advent of Glean, Logran Ally. The value of trace elements became more important, particularly zinc back then. Our customers were doing mostly wheat, barley and sheep. Farmer’s rotation was grain growing and the other half would have been sheep grazing for fat lambs on a three-year rotation.

In the early 90’s we started doing trials in this area for direct drilling which at first was adopted slowly but gained rapid acceptance with existing air seeders being adapted with varying knife point and press wheel designs.

Now, there’s a lot more technology involved in farming, we’ve gone from very limited amount of chemical inputs to a huge range of inputs and technologies, including GPS and Variable Rate Application.

What’s important to your clients?

Neville
Well, I’d say all our clients, want to improve their operation and increase yield and make more money. They are cautious in adopting new technology for good reason because it’s expensive and sometimes it can seem to be a bit complicated at first. But basically, they want to increase yield. They want to do better and obviously make more money, but without impacting their soils and environment, reduce or eliminate erosion. They see the value in better disease control, grass control and better nutrition.

What is the biggest issue in your region?

Neville
Well, probably one of the big things in the Mallee region is we are always looking to improve fertility and yield in our sandy soils. Sandhills are low producing parts of the farm. So, there is a critical need for this to be recognized to improve yields. To have the whole paddock producing, not just parts of the paddock.

Do the clients come to you with a soil test?

Neville
We organize the soil tests. We are big on doing trial work and working with our customers with trials on their own farms to assist and introduce new products and solutions that way. We run a very extensive trial site these days, it has come a long way from where we started with chemical companies, fertilizer companies and seed producers.

How do your clients view liquids in the mix?

Neville
Well, they’re all open to using liquids in one form or another. Whether it be in-furrow or later and use the liquid nitrogen and trace elements, to push the crop along.

We introduced in-furrow with Liquid Systems probably 20 years ago. We did some trials to the west of Manangatang, and we got some really good results. The trial was quite basic. It was UAN, zinc and flutriafol. That’s what got us keen on in-furrow nutrition. That’s when we first started selling Liquid Systems. We have grown from there and we’d like to have more of our customers on liquids, but as you know, some spend a lot of money on sheds and front-end loaders and elevators and fertilizer storage. So, they want to utilize those investments that are sitting there. But they are coming across to liquids. We don’t do just liquids, we still use base granular fertilizers with mostly trace elements and liquid nitrogen, fungicides and insecticides going in-furrow.

What do you say are the key benefits of liquids themselves?

Neville
In our region, our soils are red calcareous soils, which don’t lend themselves to liquid phosphorus, like the highly calcareous, grey soils in South Australia. But our sandy soils, respond well to nitrogen, zinc, manganese, copper and fungicides. We also get good results with insecticides and using Uniform for Rhizoctonia control. So, good disease control, variable rate application and yield improvements are key benefits.  Liquids Systems definitely allow farmers to push some of the country a bit harder than they have in the past.

Are there any downsides to liquids?

Neville
To me, there’s none. But to some farmers, there is a bit around logistics. Having a truck with fertilizer and a truck in the paddock with the liquids. But, once they adopt it and they get used to it they realize liquids are very easy to store, transfer and transport compared to granules, they get better at it and improve their systems as they go.

Are you seeing any trends with in-furrow application?

Neville
There are a number of growers who have a liquid system and they like to inoculate their legumes down the tube, which is very effective. They like doing it that way.

How do your clients get the liquids?

How do you rate in-furrow liquid application from 1-10?

Neville
In our region I would rate it fairly high, an eight I reckon, it’s been great for yield improvements, you can variable rate UAN or SULSA depending on soil type, good early disease and insect control.  Liquid Systems have come a long way since I was first introduced to the concept with section control, variable rate control and row by row control. 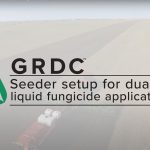 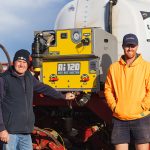