Targeted applications of liquid trace elements and fungicides are not only saving Coomandook mixed enterprise farmer Andrew Hansen time on his sprayer, he predicts it has improved harvest results by up to 13%.

The southern Mallee farmer, who crops 6700ha, adopted Liquid Systems’ (SA) G22 and Spiker modules in 2013 to combat fertiliser toxicity issues in his sandy, non-wetting soils and rubbly country. He quickly saw an opportunity to also target these problem soils, which make up 40% of his property, with zinc and fungicide to help combat rhizoctonia and other fungal diseases. “I would say the damage from rhizoctonia on nearly half of our cropping country was costing us anywhere from 20 to 30% yield production,” said Andrew. “But where we’ve used liquid fungicide we’ve noticed a more even crop. We’re not having the old symptoms of bare patch and while we’re still experiencing some impact on yield, it’s not as great as it was.” Fungicide trial work on the Hansen’s property, conducted by South Australian Research and Development Institute (SARDI) science leader Dr Alan McKay, has shown a yield improvement of up to 13% with the use of fungicides, which Andrew expects is across the board. “I imagine liquid fungicides are improving our yields by at least 13%, especially on the soil types that have low water-holding capacity,” said Andrew. In addition to liquid fungicide, he also targets areas of their property with liquid zinc, which boosts plant health at germination. “Zinc makes the plant more robust to withstand a rhizoctonia attack,” said Andrew. “We previously applied zinc as a foliar spray, but putting it down the tube allows us to get it out a lot earlier, which helps initial crop germination and establishment. “While we’re still experiencing rhizoctonia damage, I think it’s a lot less severe and we’re achieving good control early in the season.”
As a result of Dr McKay’s research, the Hansens plan to apply two bands of liquid fungicide next season, with one band again targeted below the seed and one above. The aim is to protect secondary roots close to the soil’s surface, leading to improved rhizoctonia management later in the season. “We’re getting good rhizoctonia control by placing a stream of fungicide below the seed where the initial primary roots go. But later in the season when the plants’ secondary roots grow near to the surface, we’re getting damage,” said Andrew. The Hansens mixed farming enterprise, which is run by Andrew and his wife Joanne, together with his brother Garry and sister-in-law Merrawyn, produces wheat, canola, barley and oaten hay, as well as a 2000 self-replacing ewe flock and 140 head of breeder cattle. 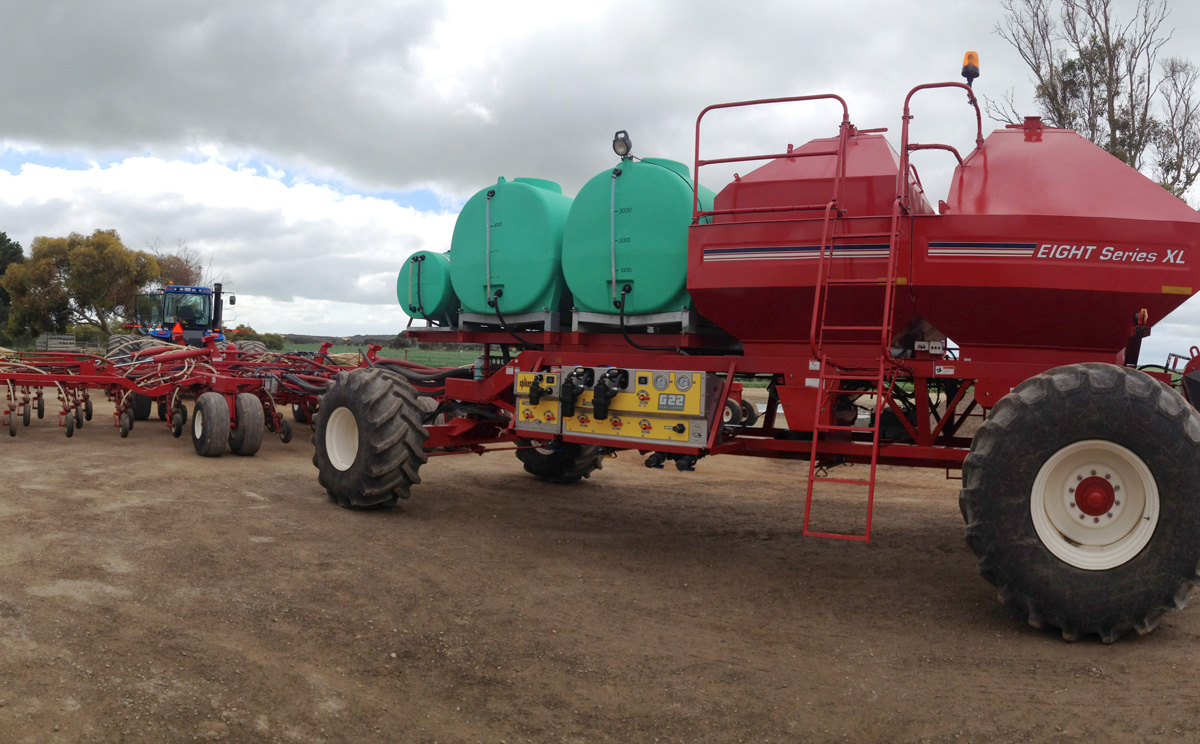 For the past six years the Hansens have used a 24m Morris precision seeder contour drill on 305mm spacings. Unable to double shoot using this seeder, they soon experienced fertiliser toxicity issues, especially in canola crops. “Canola is our highest value crop producing some of our best gross margins and fertiliser toxicity was really affecting canola germination,” said Andrew. “Not only that, but we had delayed crop establishment which isn’t good for canola. When you have uneven maturing it makes windrowing and harvesting difficult. Plus, poor establishment meant there was reduced crop competition for weeds, with more ryegrass and other weeds coming up in those areas.” The Hansens decided to invest in the G22-Dual module to allow them to supplement their granular fertiliser, placing it deeper than the seed. The liquid fertiliser is immediately available to plants in their non-wetting and rubbly soils, leading to more even germination and plant numbers. “Despite a few ordinary years, we’ve had more consistent results by using the Liquid Systems equipment,” said Andrew.

Despite a few ordinary years, we’ve had more consistent results by using the Liquid Systems equipment

“You get what you pay for”

The decision to go with the system designed by Peter Burgess was made after researching a wide range of options at varying price points. “Farmers I spoke to with liquid systems seemed to have more issues with budget equipment,” said Andrew. “You seem to get what you pay for and the last thing I wanted was to be held up at seeding time because the liquid system wasn’t working. We’ve got a large cropping program and seeding is such a critical time of the year. Timeliness is paramount and if you don’t get your crop in on time it can cost you a lot of money down the track. So that’s why I went with Peter Burgess’ liquid system.” Andrew’s decision was reinforced by a friend’s recent experience. “He’d set up a liquid system on the cheap a few years ago, but gave it away after two years because it was just too hard to manage. He’s just set up his seeder with Liquid Systems equipment and has got on really well with it. He said to me, ‘why didn’t I do this years ago?’ I guess that reiterated to me that I’d made the right decision.”

Using the liquid system, the Hansens are also saving on extra foliar spraying passes. Andrew says instead of two foliar sprays for stripe rust management, only one is now required at full flag leaf emergence. “We’re finding that by putting fungicide down the tube, we’re getting away with just one fungicide application on susceptible varieties,” he said. He is also saving a pass by avoiding a follow-up zinc spray, which he hopes will also be the case for copper and manganese, depending on results in 2016. “We’re trying a few things to save time later on the sprayer,” said Andrew. “It has definitely worked with liquid zinc and fungicides.” Andrew likes the flexibility the Liquid Systems (SA) equipment gives him to be more responsive and targeted with inputs. “The system gives you the ability to change what you’re doing on the go. We might have a certain paddock that due to its soil type or history needs more zinc or start-up nitrogen, which we can apply accordingly,” he said. “So it’s more targeted. Instead of a broad application right across the paddock, it’s targeting the inputs where they’re needed. “The level of accuracy and consistency that the Liquid Systems equipment provides also means you’re not wasting product. You’re not putting too much on and you’re not under-fertilising either. So for budgeting, it’s very good and also for consistency of application right across the paddock. “Having a precision liquid system becomes even more paramount when you start using more expensive fungicides, especially for country like ours, which isn’t high-yielding. “You don’t want to put them out at a higher rate than necessary, otherwise you start blowing your gross margins.”

“The level of accuracy and consistency that the Liquid Systems equipment provides also means you’re not wasting product. You’re not putting too much on and you’re not under-fertilising either. So for budgeting, it’s very good and also for consistency of application right across the paddock.

The Spiker injection system, which spikes inputs into the main liquid delivery line, was another reason Andrew chose Liquid Systems (SA). This module allowed him to keep the liquid zinc separate from the fungicide and UAN which are pre-mixed in the product tank. While formulation changes in the fungicides Andrew uses means he can now mix in the zinc without compatibility issues, he has used the Spiker module to experiment with biological stimulants. Andrew cautions other farmers to be very careful with the compatibility of inputs in order to avoid blockages. “If you’re changing any of your inputs, make sure you do bucket tests first to make sure they’re compatible,” he said. Andrew sees the opportunity to use new inputs as they emerge in the marketplace as a big advantage of a liquid system. “Using fungicides was the next step for us to improve crop germination and establishment,” he said. “Having a liquid system gives you the flexibility to trial new products and technologies and I’m sure th ere will be more management tools that we can implement with the liquid system going forward. “It’s all about trying to tweak the system to get the best bang for your buck. We have to use all the technologies available to become as efficient as possible because with the costs involved in farming, you just can’t afford bad years. “When my father had a bad year, he’d just hope the next year would be better, but we just can’t have those disaster years. Choosing a liquid system is about risk management.” 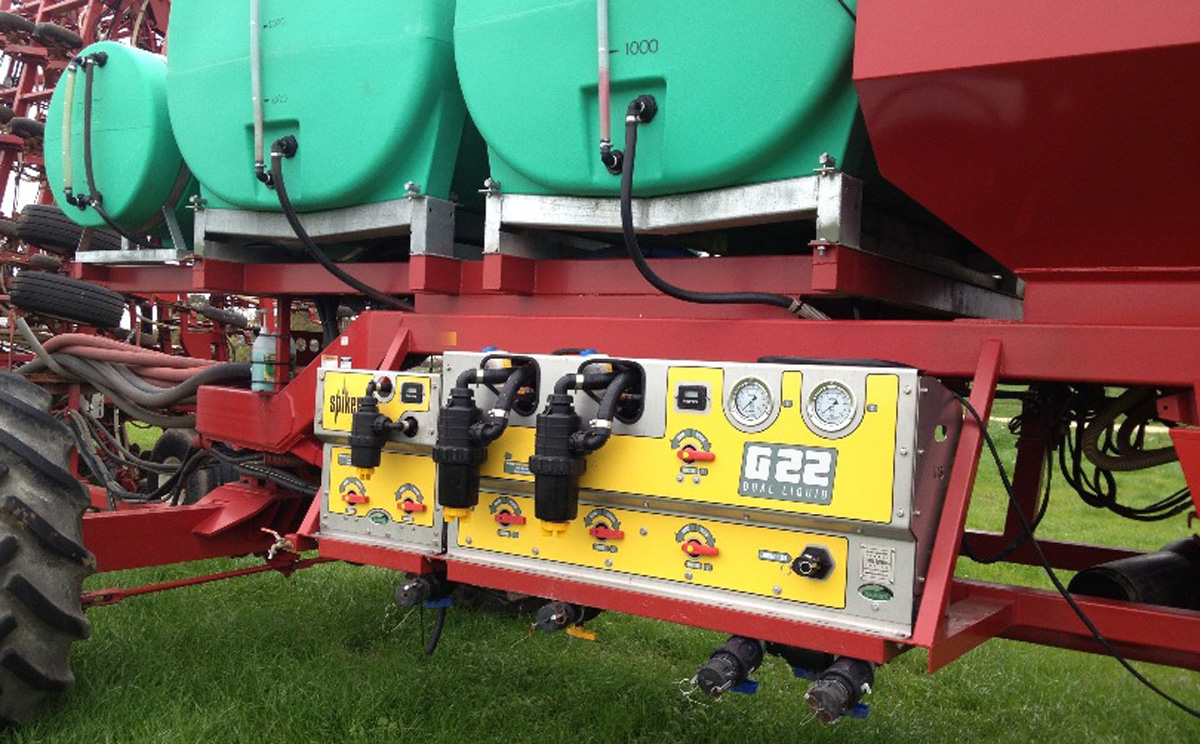