Before investing in liquid injection equipment, applying trace elements was a case of too little too late for Wudinna grower Dustin Sparrow.

The continuous cropper, who previously applied trace elements via boom spray, had noticed zinc deficiency in his wheat, barley and pea crops.

“We used to apply our trace elements once the crop was tilling – mid to late tilling stage,” said Dustin. “Zinc was the main trace element that we were always putting on too late and we noticed a deficiency in the crops. We’ve been told that zinc should be applied at the two to three leaf stage and it was probably applied three to four weeks late.

“We get it all out up front now and it’s there ready to go when the crop needs it. Plus we’re applying it right with the seed where it needs to be.”

Dustin, who farms 3600ha with his wife Jodi on South Australia’s Eyre Peninsula, purchased a Liquid Systems Ai120 liquid injection system in January 2016 for the application of trace elements zinc, manganese and copper, plus the fungicide Flutriafol. He says the equipment’s simplicity allowed him to hit the ground running.

“The Liquid Systems’ equipment has been one of the best products we’ve put on a machine,” said Dustin. “We haven’t had to go back and touch it. It’s worked exactly how we were told it would.”

The Sparrows use the Trimble 1000 with Field IQ crop input control system to operate the liquid equipment, which is installed on an 8-year-old Seed Master knife point machine.

“We were already using the Trimble system on our seeder and just populated another part of the screen when we put the liquid equipment on. We just put in the rate and away it went.”

They are considering reducing trace element rates due to favourable soil tests, but in the first two seasons applied 2kg/ha of zinc sulphate, 3kg/ha of manganese mono and about 200g/ha of copper sulphate. For the 2018 season, the Sparrows switched to a copper oxide formulation as there had been settling issues with the previous copper product. They resolved this at the time by removing copper from some mixes. The Sparrows spent up to $30,000 on additional tanks and equipment, including a 7000L liquid tank that is fitted to the frame of their seeding bar, a 13,000L cartage tank and three storage tanks for each trace element. Dustin spends a day prior to seeding mixing the zinc and manganese using a cone bottom tank and four-inch pump. “I can mix all of my trace elements in one day without any trouble. During seeding, I do most of the carting and two workers drive the tractor. We keep up easily,” he said.

The Sparrows apply between 40 to 60L/ha of liquid product and have found the rate control to be “spot on”.

“The rates have been perfect; they’ve never given us any issue,” said Dustin. “There’s a level gauge on the tank that tells you what’s in the tank all the time, so when you fill up, you just put in the computer how many litres you’ve added and when you go to fill up again, it’s usually spot on. What should be in the tank and what’s displayed on the level gauge match.”

Tube blockages have been limited to copper and cleaning issues, according to Dustin. “The only times we’ve had a blocked hose is when we didn’t clean it out properly or because we’ve put the wrong products together.”

Dealing with the team at Liquid Systems (SA) has also been seamless for the Sparrows. “When we were researching liquid injection systems, out of everyone we talked to, there was never a complaint about the Liquid Systems equipment.”

“Their system is used all around the world, but it’s built in Adelaide, which was another big plus; just knowing that there’s someone local we can talk to who knows what they’re doing.”

The Sparrows previously applied trace elements and herbicides in one pass via a boom sprayer and have since reduced their herbicide costs, as they can now choose cheaper herbicide formulations. Before they had to use a more expensive ester herbicide, as it mixed well with zinc.

“We can use the cheaper 2,4-D amine formulations now, whereas we couldn’t before because it would block up the boom sprayer when mixed with zinc. The ester formulations were okay, but they’re at least double the cost of 2,4-D amine,” said Dustin. Above: 6 x “Stacker” manifolds are mounted on the bar, with 50 terminal outlets using friction tube assemblies. 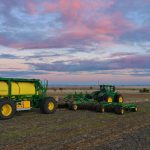